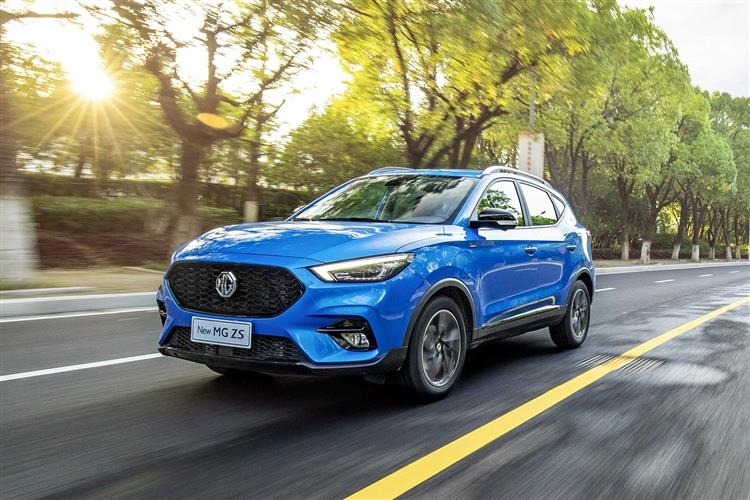 In seeking a small B-segment SUV, you probably won't have considered the MG brand as an option. Ought you to? Jonathan Couch looks at the improved version of MG's ZS and decides.

MG Founder Cecil Kimber wanted to make cars that would be, in his words, 'affordable and fun to drive'. Well, this ZS model is a small SUV that claims to tick both those boxes while offering class-leading interior space and exceptional value for money. It all sounds promising and sure enough in this revised form, this ZS delivers the company's most credible contender yet.

You still might not associate the MG brand with SUVs, but that's what this Chinese-owned maker concentrates on these days. Here's their most important one, the supermini-sized ZS, originally launched back in 2017 and now significantly revised. This is one of the most affordable small crossovers of its kind, but despite that you probably won't have considered it. We're here to decide whether you should. The ZS badge has been historically on an MG - in 2001 when it designated a sportier version of the Rover 45 saloon that sold until the wind-up of the MG Rover business in 2005. Fortunately, this new-era MG ZS is nothing like that and it's made by a manufacturer that has very little in common with the way the company was back then. SAIC, the 'Shanghai Automotive Industry Corporation', bought the remains of Rover and the MG brand in 2007 in a deal that included use of the once-great Longbridge factory in Birmingham. To begin with, SAIC used this plant to screw together models together from parts shipped over from China, thus imbuing them with a token level of 'Britishness'. The brand doesn't bother with that any more. Like its only slightly larger SUV stablemate, the HS, this ZS model is made and assembled in Shanghai - but that still doesn't make it a completely Chinese product. MG claims that the version of the car we get here has been re-engineered specifically for a UK audience and developed for optimal ride and handling on our appalling roads. We'll see.

For its conventional ZS offering, MG has concentrated on a 106PS 1.5-litre VTI-tech four cylinder petrol unit mated to a five-speed manual gearbox. Previously, there was a three cylinder 1.0-litre petrol unit too. Today's 1.5-litre variant can get to 62mph from rest in 10.9 seconds en route to 109mph. As before, there's also an alternative full-electric ZS EV battery-powered model. This is powered by a 44.5kWh, water-cooled lithium-ion battery which has a WLTP-rated driving range certified at 163 miles. There's 105kW of power, equivalent to 143PS, and the 62mph benchmark is dispatched in just 8.5s, though there's a rather limited top speed of just 87mph. The Chinese brand says that this ZS has been extensively tested on UK roads and developed for UK drivers. If you avoid entry-level trim, you'll find that the steering comes with a choice of three selectable modes - 'Urban', 'Normal' and 'Dynamic'. The 'Urban' setting offers a lighter and quicker response at low speeds and when parking. Alternatively, the 'Dynamic' mode is designed to increase the steering effort, deliver a higher damping effect and increase the centre definition at medium and high vehicle speeds. The 'Normal' steering option aims to deliver the best all-round fit to MG's tailored suspension set-up.

The ZS now features a smarter front face thanks to the way that the 'stellar field' front grille of the original model has evolved into a more striking hexagonal grille which frames the famous MG logo. There are now full-LED headlamps which sweep back towards the wings, plus re-styled 17-inch alloy wheels and more colour-coding at the back. And the top 'Exclusive' version gets an aluminium-effect lower grille and fog-lights. Inside, there's a revised dashboard design with more soft touch materials, finished with detail stitching. The central 10.1-inch floating colour touchscreen continues as the cabin centrepiece, featuring a DAB radio, Bluetooth connectivity and music streaming, plus Android Auto and Apple CarPlay smartphone-mirroring. A series of fashionable piano key buttons are arranged beneath the floating colour touchscreen, giving easy access to the air conditioning and other comfort controls. As before, what you're getting inside is SUV C-segment 'Qashqai'-class standards of space for SUV B-segment 'Juke'-style pricing. A spacious 448-litres of cargo capacity (some 60-litres larger than is typical for a supermini-based B-segment SUV) is welcome, as is the split-level boot, which provides plenty of room for prams, luggage, outdoor leisure equipment or the weekly shop. Keen cyclists and adventure sports fans will benefit from numerous compartments throughout the car which provide additional storage. Fold the rear seats and there's 1,375-litres of space.

This Chinese brand has done well to minimise the efficiency downside for those graduating to this ZS SUV from their MG3 supermini. This crossover can't be as aerodynamic as that smaller model and it's about 65kgs heavier, but its running cost figures are hardly any different, the 1.5-litre manual ZS variant managing 45mpg on the WLTP combined cycle and 155g/km of WLTP-rated CO2. You'll read plenty of reviews telling you that this is some way behind the ultimate class standard - which is true: but competitors cost a lot more. What about the ZS EV electric model? Earlier we mentioned this car's 163 mile WLTP-rated driving range - which rises to 231 miles on the WLTP city cycle. Featuring rapid charging capability, the ZS EV can charge from 0-80% in 40 minutes from a 50 kW charging station (if you can find one). At home, the car can recharge itself using a standard 7KW wallbox in six hours. And other running cost issues? Well, all versions of this MG come with an impressive seven-year, 80,000-mile warranty as standard - which is better than most rival brands can offer. Additionally, there's a six year factory warranty against rust, while a year's breakdown cover is also part of the deal. As for servicing, the MG requires a scheduled maintenance stop every 15,000 miles or 12 months, depending on which comes round sooner. Pre-paid servicing packages are available through the 'E-Dynamics' programme that dealers offer.

This improved ZS is evidence of MG's growing confidence as a car marker. And of the evolution of the brand. Now at last, they've progressed as far as offering cars that are truly class-competitive. What that means is that you can enjoy the large price saving this car offers over mainstream competitors without feeling that you've opted for a significantly inferior product. There's quite a lot to be said for that. In fact, there are plenty of things about this MG that you might conceivably prefer to some rivals. Were we to be shopping in this segment, we'd certainly be impressed by the class-leading levels of interior space. And we'd value the long 7-year warranty and the high standards of equipment you get for the money. And in summary? Well is this the best car in the sector? No. Is it the best really affordable model in the class? Almost certainly, yes. For MG, that represents a significant achievement.

Oct Delivery
Model Shown is for illustration purposes only.